Somewhere in the frozen peaks of a very secluded mountain range–the type that is commonly host to all number of fiercely religious stone age tribes who worship beasts of the primordial ages of yore–is the Stronghold of the Wooly Plesiosaur. Who built it? Why? How did a Plesiosaur find itself in a lake inside a mountain peak in the first place? Below the cut are a few suggestions for these mysteries. 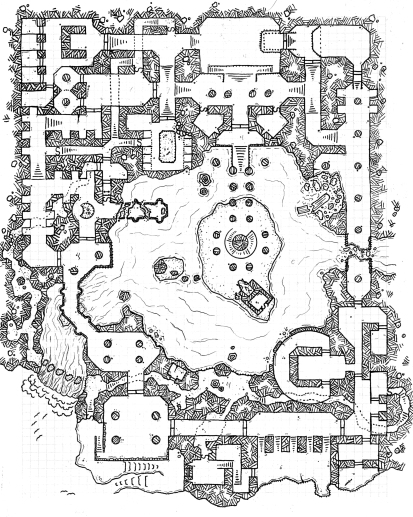 Roll a d5 (I know you have one of those) and unlock the mysteries of… The Mountain Stronghold of the Wooly Plesiosaur!

1. Long ago a village in the nearby glacial valleys, for generations having subsisted on what tubers could be grown from the permafrost on a 9-5 basis, drinkin’ on fermented tuber juices and 1 part yellow snow, and having weeknight dinners in front of the fire (no time for family meals anymore) made from what could be raked and boiled from the droppings of feral frost worms, fucking had it up to here with village life. So they packed up all their reindeer-skin luggage, followed a wise man to the Mountains of the [insert dour, in-need-of-Prozac Cromlike pantheon here] Gods only to encounter an ancient ruin wherein lived a beast of such proportions and wooliness that the sheep of the valley turned away and went back down the mountain in shame. Now, these villagers operate one of the most profitable sheering operations the northlands had ever seen.

2. Primeval Plesiosaur ancestors were swept up in storm of unspeakable proportions, the likes of which has never since been glimpsed from behind the death-colored curtains of prehistory, and deposited within a subterranean mountain lake. Unfortunately (or fortunately as natural selection goes), these two Plesiosaurs were brother and sister and their offspring were not too sightly when it comes to Plesiosaur standards of beauty. The females had a bit too much hair–which is to say any hair at all. Soon (several million years later), this hairiness of the lady types became a pretty big draw for the male Plesiosaurs. They were warm, all blondes, and best of all, completely out of luck when it came to selecting mates beyond the mountain lake. Very soon the animals took on other, more bodacious mammalian qualities like hours long live births in which gallons of blood were lost and the unaccustomed Plesiosaur pelvic bones were unhinged and third degree vaginal tears occurred. [Yes, I know Plesiosaurs likely gave live birth.] The wails of the females sounded from those mountains for millennia and eventually drew forth a grunting tribe of apish humans who began to worship the creatures and eventually, through strong public sector investment in education, were able to construct the stronghold to hold their wooly gods.

3. Once upon a time in A Land Before Chronological Measurements altogether, there was a young aquatic reptile whose name, Luuburabloopaloo, cannot (should not) be spoken in the lubbery throats of humans and demi-humans (save gnomes) who would raise his elongated neck high above the crisp tropical waves (a lot hotter back then) of his Mesozoic undersea home and peer longingly at the escarpments above the green swaying things others not too unlike his own kind but with gross, blunt flippers ate from and he thought to himself, “Blurrgalbloopplur abloo burlp.” He was much too smart for his own kind. He was a prodigy. He’d mangled his first icthyosaur at six months. So one evening, as his pack distracted with tearing out the viscera of a bloated, water-logged prototype to the opossum, he swam off quietly to the shore. He found a cove and followed its winding path toward the sheer rises of the mountains. By great determination he clamored up the slick rockface of waterfalls on his flippers, feeding in the increasingly cold nights on really surprised marsupials, and by morning continued onward. At length he came to a strangely formed cave in the mountainside. Its occupants came out to meet him where he beached himself on the snowy mountainside. These creatures were reptilian but walked on two legs and were covered in white fur. They took him into their stronghold and warmed him and after months taught him their hissing language, which they used mostly for just hissing. Hissing if another came too close. Hissing if someone didn’t take out the trash. Hissing when coming home from the temple after spending four whole days that day in a damned  “hexinar” cabbal-building getaway on level 7. Nonetheless, Luuburabloopaloo learned much from these strange serpent men, including their ability to commit arcane rituals in the names of Triassic gods. Becoming wooly, then, was no biggie. But surviving the countless millennia by magical [manipulation of time, transition unto undeath, or brewing of the elixir of eternal life from the white petals of the plant that grows at the mountain peak, etc.–your choice] was his ultimate goal. Once achieved, Luuburabloopaloo sets his eyes upon the changed lands below his mountain stronghold, which he totally took over way back when the serpent folks became preoccupied with the sinking of some hairless, hydrocephalic ape species’ island kingdom out on the ocean he had long ago left behind, and with his force of serpentfolk magi and lower class degenerate serpent people (who really should pick themselves up by the scales and stop taking from the hard working serpentfolks at the top), he will [bring it all under his wooly flipper, attempt to reclaim the bones of his ancestors which’re being dug up and sold for all nefarious purposes, or just get the hell out of this fucking mountain, etc., again your choice.]

5. Keep it a mystery. It adds an element of wonder to the game. Plus, it’s not like the PCs (or their irl counterparts) give two shits about the extensive and detailed and original background you’ve provided for the Stronghold of the Wooly Plesiosaur since all they’re gonna do is kill the poor thing for its fur so they can make some sweet, sweet leg warmers, collars for the plate mail, and barbarian-chic sword sheaths.

One thought on “Mountain Stronghold of the Wooly Plesiosaur”